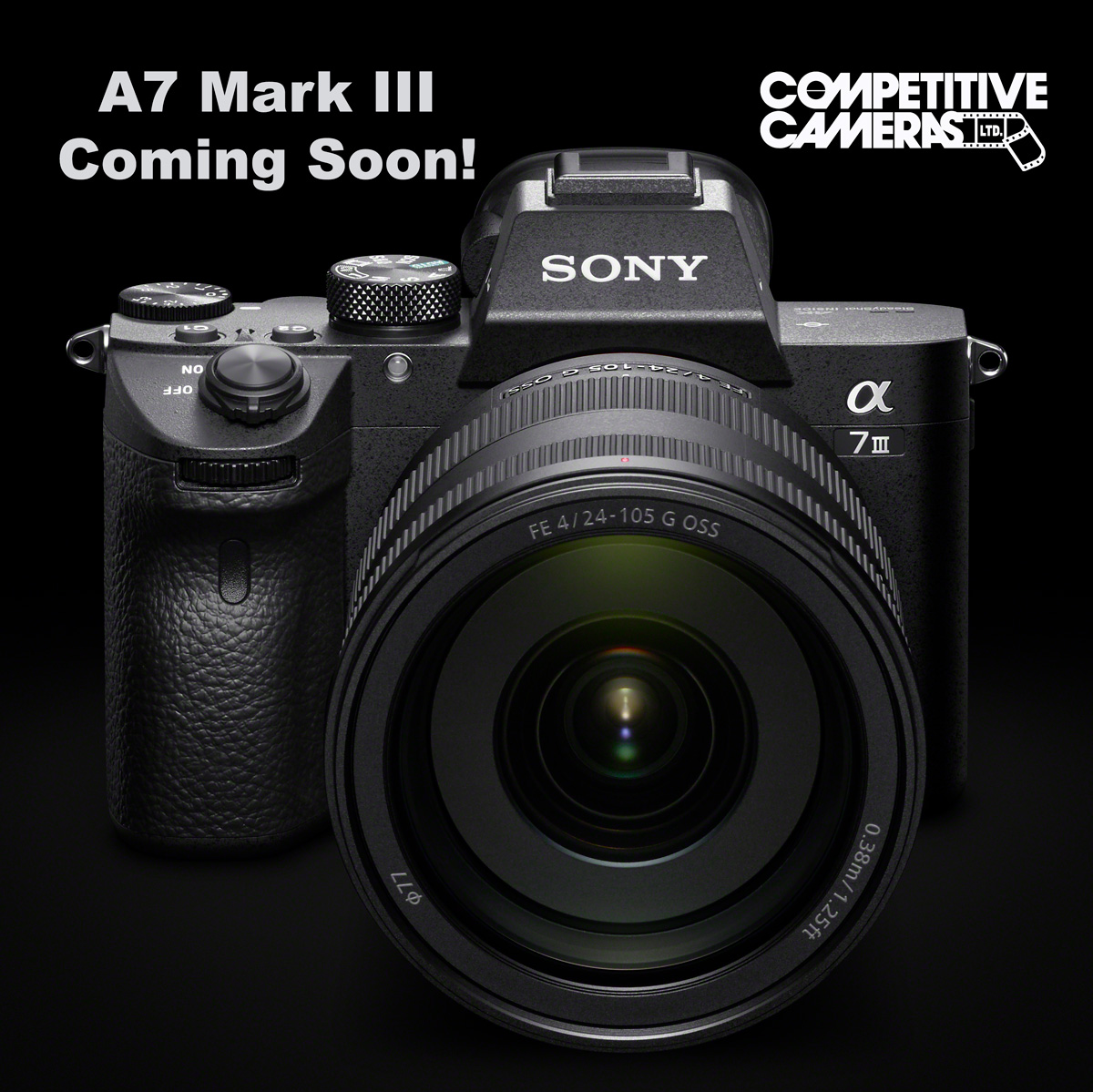 [gallery ids="http://competitivecameras.com/wp-content/uploads/2018/02/Sony-A7-Mark-III-Front-Competitive-Cameras.jpg|Sony A7 Mark III ,http://competitivecameras.com/wp-content/uploads/2018/02/Sony-A7-Mark-III-Competitive-Cameras-Back.jpg|Sony A7 Mark III,http://competitivecameras.com/wp-content/uploads/2018/02/Sony-A7-mark-III-Competitive-Cameras-Top.jpg|Sony A7 Mark III"]The a7 III has been refined for extraordinary image capture control and quality from the next generation 24.2MP full-frame BSI image sensor and latest BIONZ X image processor, down to the smallest operational detail. Featuring 693 phase AF points with up to 10fps1 continuous shooting 4K2 HDR3 video and the longest7 battery life of any mirrorless camera to date –  the a7 III has everything you need.

The newly developed 24.2MP back-illuminated Exmor R™ CMOS image sensor is paired with a front-end LSI that effectively doubles the readout speed of the image sensor, as well as an updated BIONZ X™ processing-engine that boosts processing speed by approximately 1.8 times compared to the α7 II.  This results in high sensitivity with low-noise performance and wide 15-stop4 dynamic range.  No optical low pass filter maximizes resolution, while also having the ability to output 14 bit RAW4 format even when shooting in silent5 or continuous mode. Nothing less than spectacular images.

The a7 III features a new front-end LSI that effectively doubles* the readout speed of the image sensor, as well as an updated BIONZ X™ processing-engine that boosts processing speed by approximately 1.8 times compared to the a7 II. These powerful components work together to allow the camera to shoot at faster speeds while also enabling its impressive ISO range of 100 - 51200 (expandable to ISO 50 – 204800 for still images and massive 15-stop4 dynamic range at low sensitivity settings. This ensures outstanding overall performance at all settings and in all shooting conditions.

Up to 10fps1 with Silent5 or Mechanical Shutter

The a7 III is equipped with a refined image processing system that allows it to capture full 24.2MP images at up to 10 fps1 with continuous and accurate AF/AE (autofocus and auto exposure) tracking for up to 177 Standard JPEG images, 89 compressed RAW images or 40 uncompressed RAW images. This high speed 10 fps mode is available with either a mechanical shutter or an electronic shutter for completely silent5 shooting. The a7 III can also shoot continuously at up to 8 fps1 in live view mode with minimal lag in the viewfinder or LCD screen. These high speed options ensure that fast moving subjects can be captured with extreme accuracy and incredible image detail.

The a7 III is exceptionally capable as a video camera, offering 4K2 (3840x2160 pixels) video recording across the full width of the full-frame image sensor. In video mode, the a7 III uses full pixel readout without pixel binning to collect about 2.4x  the amount of data required for 4K movies, and then oversamples it to produce high quality 4K footage with exceptional detail and depth. Both S-Log2 and S-Log3 are available for increased color grading flexibility, while HLG (Hybrid Log-Gamma)3 is included to support an Instant HDR (High Dynamic Range) workflow, allowing HDR (HLG) compatible TV’s to playback beautiful, true-to-life 4K HDR imagery. The a7 III can also record Full HD at 120 fps2 at up to 100 Mbps, allowing footage to be reviewed and eventually edited into 4x or 5x slow motion11 video files in Full HD resolution.