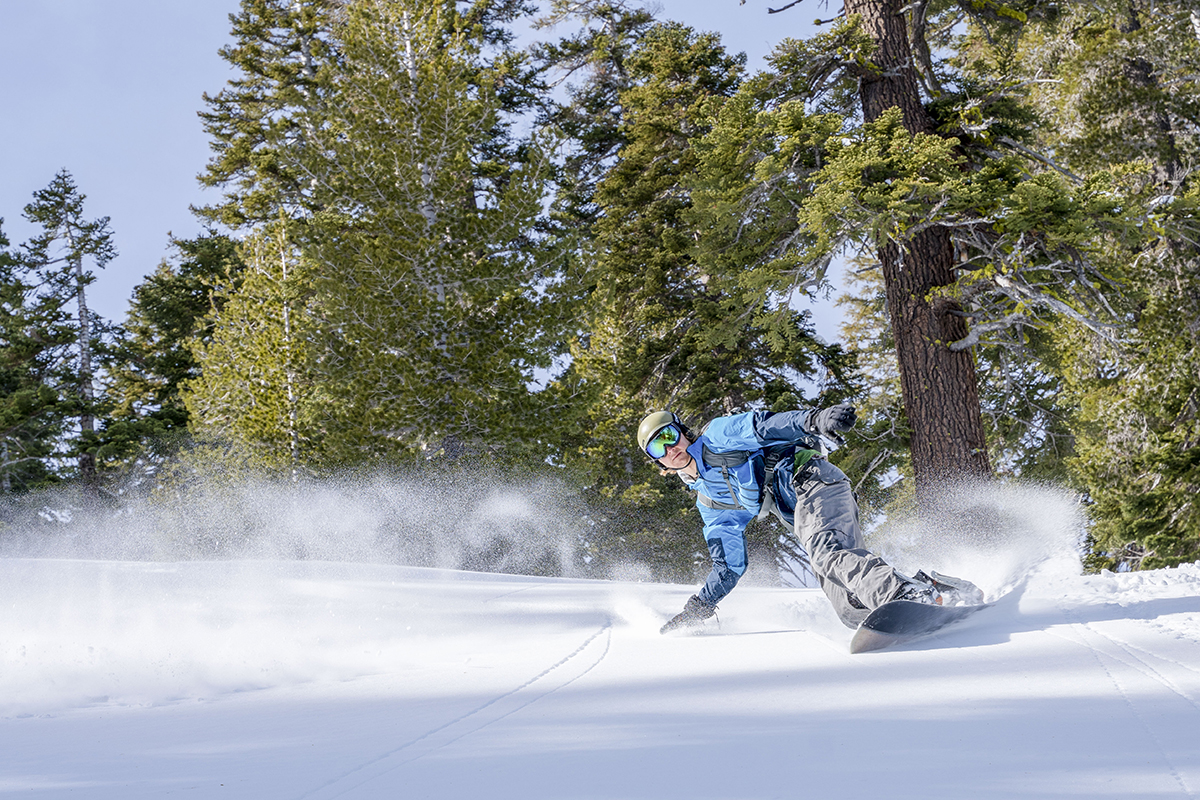 By Jenn GidmanImages By Anthony CupaiuoloNearly 20 years ago, Anthony Cupaiuolo had a very different career than his current one: He was a political consultant. Then, in 2001, he decided to merge two of his passions—snowboarding and videography—and founded First Tracks Productions in California's Lake Tahoe area, which soon built up a reputation as a full-fledged video production company specializing in action and adventure sports films, commercials, tourism clips, and event and promotional videos, in both the more-frequented parts of Tahoe, as well as deep in the backcountry.Over the past year or so, First Tracks has added photography into the mix. "I took photography classes in high school and college and always enjoyed that immersive experience," Anthony says. "I like the idea of telling a story in a single frame, as a complement to the way we usually tell it over an entire video. The photography angle also infused me with new energy. And clients seem to be responding to it: If a project is video focused, for instance, but you can provide a client with stills for their social media, that's a real added benefit."Shooting these types of videos and photos in the Lake Tahoe backcountry is a natural fit for Anthony and his company. "It's such a beautiful area here," he says. "We work with nonprofits and groups like the National Forest Foundation, as well as do pro bono work for organizations like Lake Tahoe Wildlife Care, the Boys and Girls Club, and the Tahoe Area Mountain Bike Association. We work with the forest service, too, so we spend a lot of time promoting taking care of our trails and building new ones. I've got an almost 8-year-old daughter, and it's terrific that she's growing up understanding what it takes to maintain and respect the areas that we get to recreate in."Anthony recently added a Sony A7R III full-frame mirrorless camera system to their line-up, which meant he needed to invest in new lenses. That's when he came across the Tamron 28-75mm F/2.8 Di III RXD. "When you switch ecosystems, having to start from scratch with lenses can be a tough thing when you've got a lot of money invested in other equipment," he says. "This lens was so affordable for what you're getting with it. It's got a focal-length range that's ideal for a variety of shooting scenarios, whether we're on the slopes or in the lodge. Plus, being able to take advantage of that fast F/2.8 maximum aperture when I'm shooting indoors is awesome, since we often do indoor interviews or shoots at the bars and restaurants."What really excited Anthony about the 28-75, however, was its light weight, at just 19.4 ounces. "Since much of my work is in the backcountry, I'm constantly hiking up into the mountains, going far into the trailheads and climbing a lot of vertical feet," he says. "Being able to keep the weight of my gear down is important, because if my equipment is too heavy, I'm not excited to get out there. Or if my lens is too heavy, I might sacrifice another piece of gear I need. Plus, I plan on using that lens on a gimbal for some upcoming videography projects. It's reassuring to know that it's compact and light enough to use on smaller gimbals, so I don't have to lug a larger gimbal up the mountain with me."The lens also withstands the sometimes harsh weather. "I've used this lens a number of times when the snow's been falling," he says. "And if you're doing a shoot with models and agencies involved, you sometimes have to go ahead with it, no matter what the weather. This lens has definitely been covered in snow, and there were zero issues. I would simply head inside, let the lens defog a bit, and I was good to start shooting again."Capturing a sense of place by making the scenery the star of the photo is one of Anthony's goals when he's creating his images. "I want my viewers to be able to imagine themselves there, even if they're not a skier or snowboarder," he says. "I want them to picture themselves in that moment, looking down at that view. Now, if you also happen to be a skier or snowboarder, that brings it to another level. Those viewers think: 'I want to be there right now, that snow looks fantastic.'"Anthony points to his scenic of Lake Tahoe as an example of placing the landscape front and center. "What I like with this image is you really get to see all of South Lake Tahoe from up above," he says. "From this vantage point, you can see all of the different colors of the lake. It's always blue, but depending on how the light's hitting it, and what kind of light it is, the shades of blue differ. This is a perspective you can't get unless you're up high in this particular spot."

28mm, F/7.1, 1/800th sec., ISO 100What time of day Anthony and his team head out depends on what they're shooting. "When the lake is the central character of the image, then having the water and background lit up is the most desirable," he says. "When you're photographing an athlete on the slopes, however, the best light to work with is often in the early morning and late afternoon. The conundrum comes in because the best snow-accumulation conditions are often found on north-facing terrain—and that's not usually where the light is best. You'll be working in shade sometimes, or filtered light. On a south-facing slope, you'll get better light, but you won't always get good snow. There's almost always a trade-off."Being surrounded by all of that snow means Anthony has to keep a careful eye on his exposures. "I see a lot of snow photos that don't have texture in them, and it just looks like a blur of bright white," he says. "I want to show the texture I was seeing when I was out there. I try to never overexpose, because when you blow out the snow, it can be hard to recover. So I'll underexpose a third of a stop, and then in post I can usually just bring the highlights down so I won't lose that texture I'm after. I shoot in RAW just so I have that kind of flexibility."Polarizing filters can prove handy for certain situations, though Anthony doesn't use them all of the time. "Sometimes they can be too HDR-like for my personal taste," he says. "I want everything in my images to look as natural as possible. But I do use them on occasion, such as in the pictures here of Ian, the guy in the yellow jacket, on the top of the mountain and pulling off a jump."

40mm, F/3.5, 1/1000th sec., ISO 100Anthony usually shoots handheld for his still photos, and often in Shutter Priority. "By shooting this way and closing the aperture quite a bit, I can create an appealing background blur—a technique I also use during the warmer months when I'm photographing mountain biking, with the trees in the background," he says. "That said, sometimes I'll have shoots with multiple athletes I'm trying to capture in one frame. In those cases, I'll switch to manual or Aperture Priority, because I don't want the camera to revert to F/2.8 in those situations and only get the athlete in front in focus. To make sure the others are also sharp, I need to be at F/5.6 or even smaller."Timing is important for capturing ski and snowboard jumps, and Anthony and his team rely on a combination of hand signals, two-way radios, and even talking when they're close enough to the athletes. "The radios we only use for the bigger lines," he says. "When we're photographing a specific jump or turn, we resort to arm signals, I'll put up a big 'X' over my head to indicate to the athlete it's not time yet; then, when I'm ready, I'll touch my hands over my head. That's their sign to start coming down within 10 seconds or so. Other times we just simply yell, if there isn't too much distance separating us."

50mm, F/4, 1/5000th sec., ISO 100How Anthony composes his snowboarding shots depends on what he wants the main focus to be. "If my goal is to capture the athlete, I want to be in front of the athlete, so I can see the front of their torso and their face if possible," he says. "You don't want to shoot from behind and get a picture of their back and butt. It's almost the same approach you'd take if you were doing a street portrait: You want to see what the person is experiencing through the expression on their face."Other times, the athlete becomes secondary to the action. "The picture you see here of the snowboarder kicking up some snow spray is a perfect example of that," he says. "I wanted the focus to be more on the spray—which shows how cold, fresh, and soft the snow is—than on the snowboarder. I love that I was able to capture him during this part of the turn, so you get the juxtaposition of his motion moving one way, while the snow spray is moving another way. You can almost make the athlete faceless in these sort of pictures, because you want the viewers to be able to imagine they're the ones in the shot, ideally."

60mm, F/6.3, 1/400th sec., ISO 100To round out the establishing shots and action photos, Anthony will also insert complementary images into the narrative. "The photo you see here of Ian as he nears the apex is one example of that," he says. "This is what I call a 'sense of accomplishment' photo. You get to see how much work went into him getting where he is; the people further down on the slope offer a sense of scale so you can see how far he had to climb. Plus, once again, you get a chance to place that jaw-dropping backdrop in there."

37mm, F/7.1, 1/1250th sec., ISO 100End-of-day activities are important to include, too. "We were photographing at the Heavenly Ski Resort, and although our primary mission was to shoot the powder, the snow that day wasn't great, and the light was flat and gray," Anthony says. "So we decided to mix it up a bit and take some après-ski photos at the bar and outside. I always want to pull viewers into the photo to make them feel like they were there, to convey the message that you can come up to the resort with your friends, have a blast on the slopes, and then still have a blast when you're done."

50mm, F/5.6, 1/400th sec., ISO 200That's just one way Anthony tries to make his photos relatable to a broader audience, even if they're not avid skiers and snowboarders. "I often try to introduce into my images something that the viewer can relate to, whether they're into the sport or not," he says. "That's where my dog, Emmie, often comes in. When conditions are safe for her, we'll take her with us on our shoots. She's very well-behaved, so when I tell her to sit somewhere and 'pose,' she does. People who look at the photos with her in it think they're cute or compelling, or they'll think about their own dogs playing in the snow. It helps to draw viewers into the picture if you can make that sort of connection with them."